Update on the status of the Kickstarter

Well it's been a little while since my last blog post so I figured I'd write an update for everyone. Naturally the thought on everybody's mind has been "when are you going to release your Kickstarter". We decided a while back to stop giving estimated release dates as the moment we miss them everybody starts yelling at us for being vaporware. That being said we are in fact trying to release it this year and, believe it or not, I think we're entering the home stretch. 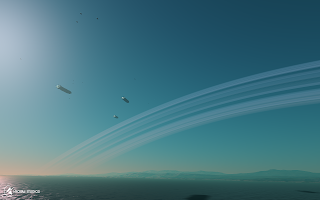 If you've been actively following us you've probably noticed that over the last ~4 months we've started regularly releasing new screen shots and small videos every week. This has been the beginning of the gradual ramp up to the release of our Kickstarter campaign I mentioned a year ago. You may have also noticed that most of these content releases are devoid of ships or anything resembling gameplay. This is because we're keeping all of our new content a secret until we launch our Kickstarter campaign.

Our Kickstarter campaign video is coming together quite nicely. As I am writing this I actually have it playing on repeat in the background and I can't begin to describe how excited the team and I are to show it to all of you. Nearly all of the animation work, with the exception of some tweaking and a few bugs, has been finished. We've done the initial pass for our audio and music. Currently we're integrating all of the particle effects, tweaking post-processing, doing a final pass on the audio, and getting ready to tackle a few remaining technical issues we need to wrap up. 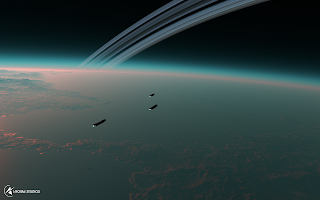 We've written the script for the live action part of our campaign video which will include both Flavien and I speaking. I'll be flying out to Europe sometime in June for the actual filming which will be the first time Flavien and I have met in-person since spring of 2010! The entire video should come in at ~10 minutes and we'll have some additional smaller videos that we'll release throughout our 30 day campaign.

I had mentioned previously that our goal was to release an interactive demo prior to the launch of the Kickstarter campaign. Due to time constraints we've decided we're no longer going to be able to do that. Instead we're planning to do a live Twitch session with Flavien playing a prototype of the game during the Kickstarter. Lastly we're almost done finalizing all of our reward tiers and we'll be releasing a list of them soon for the community to review. We're trying to stick to digital rewards as much as possible however at the higher end reward tiers we do have some plans to make physical goods available. 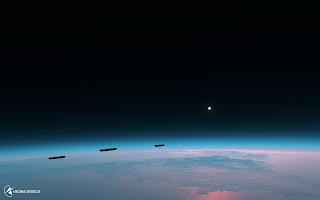 It's been a long time coming but we're almost there and we can't wait to show everyone what we've been working on!
Posted by Unknown at 8:23 PM 1 comment: