The Kickstarter video has been filmed!

Hey everyone I'm happy to report that this last week Flavien and I flew to Helsinki to meet up with our sound engineer, Panu Aaltio, as well as one of our programmers, Kimmo Kotajarvi, to film our Kickstarter video. It was the first time I had seen Flavien in-person since 2010 and it was also the first time more than 2 team members had ever been in the same location at once! Unfortunately Flavien's luggage was misplaced by the airline and we started off our day of filming by getting him some new clothes.

Once Flavien had picked out some new clothes we headed to Panu's studio to begin filming. It's worth noting that up to this point Flavien had been working on the prototype for Infinity: Battlescape in complete secrecy. Nobody else on the dev team had seen it as we have all been working on the in-engine portion of our Kickstarter video which, even though they share assets, is actually a different "game". Originally he was going to show it to us earlier however he was so excited with the progress he was making he decided to wait until we met in-person in Helsinki for a big unveiling. When we arrived at Panu's studio Flavien took the wraps off of the Battlescape prototype and showed it to the team for the first time - needless to say we were all quite pleased with the result.

After spending some time with the prototype we began setting up for recording our video. A friend of Panu's who specializes in film assisted us with getting a green screen and 3 cameras. He was a tremendous amount of help during filming not only for his expertise but also as someone who knew little about our project and was able to provide unbiased feedback.

Filming began with Flavien and I getting mic'd up followed by sound and camera tests.

Fortunately sound and video worked on our first try and to get warmed up we decided to start off with answering questions from Facebook and the forums. This ended up being a great idea as it took us some time to loosen up to the point where we felt comfortable on camera. After spending a few hours filming we broke for lunch and met up with Kimmo. Prior to flying to Helsinki we had written a script for our live action recording. Once filming began we quickly realized that the script was far too robotic and we began trying to record our video more as a casual conversation between Flavien and I. Kimmo became our impromptu director and was a tremendous help in making sure we covered all necessary topics and that we redid takes when appropriate. The day of our recording the weather was amazing and we took an hour long break in the evening to go on a hike. 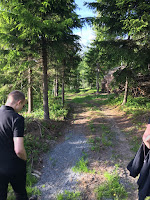 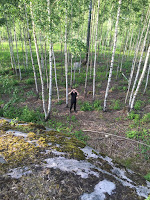 All in all we spent about 9 hours on-site recording for a total of 80gb of footage. While there's still a tremendous amount of work to do in post-production we feel confident we got some great footage and we'll be able to put together a compelling video. The editing process is going to take some time but we can't wait to show all of you the finished product!

Our last day in Helsinki the weather was cold, windy, and rainy so we didn't get a lot of sight seeing in. One of our artists, Kristian Agren, who also lives in Finland stopped by and showed us around a Finnish art gallery but aside from that we mostly stayed inside and enjoyed some Finnish beer. We spent a lot of time playing the Battlescape prototype and discussing our plans for the Kickstarter. At one point Kimmo remarked "so, you guys are here, I guess we're actually doing this". I responded with "yeah, we're totally doing this".

Today the Battlescape prototype was unveiled to the team members who were unable to make it to Helsinki. We played our very first multiplayer match, which we also recorded, and I have to say even in these early stages it was a hell of a lot of fun. We have a lot of extra footage and we aren't exactly sure what we're going to do with it yet. Perhaps at some point we'll release a "making of" or "behind the scenes" video however in the meantime it'll go into the I-Novae Studios vault.

There's a lot of polish that still needs to be done before we can launch our Kickstarter however everything is starting to fall into place. We still aren't announcing an official release date just yet but as you can probably tell from all of this activity we're working hard to launch the campaign soon. I'm incredibly proud of the team and I think you all are really going to like what we have to show you. Our last night in Helsinki Flavien finally received his luggage. I took a picture that I believe perfectly captures our excitement as we progress toward launching this Kickstarter and making Battlescape a reality.